Ah Heng lives in the 2nd room on the 1st floor of the 4th block of the Tuanku Abdul Rahman Flats, or more famously known as the abandoned Pekeliling Flats. Built in 1967, it was one of the earliest housing development projects in the city, home to about 2,500 people for over 40 decades. 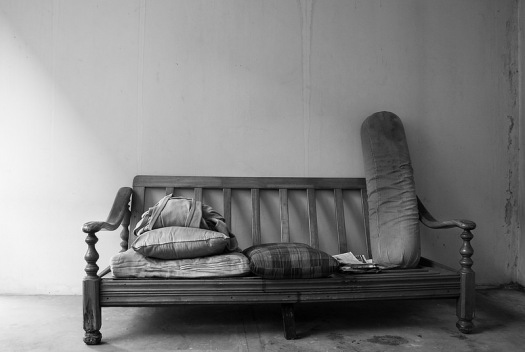 A visit today reveals an empty, desolate place. The air lingers with a sense of anger. Old furniture and fragments of personal belongings are the only hints of a past residence, left behind like the molting of a snake. Old books, magazines, idols, clothes, tapes, photographs are just some of the items still lying on the floors of these units.

He gives me a guided tour around the block, examining each room and its abandoned contents. He slaps his hand on the walls as he assures me that the building is still very strong. He asks me for the time. It was half past 4 in the evening. I asked him what time does he normally leave for home. He throws a hollow stare and quickens his pace with excitement as he gestures me to follow him.

He sleeps on a piece of cardboard on a cupboard turned over on its side. He takes a nap each afternoon from 5pm to 7pm, after which he heads to the nearby Buddhist temple for a meal.

At night, he burns pieces of wood from the old furniture to keep the mosquitoes away. Each day he scours the area for usable items. He has 2 pairs of clothes and the rest of his belongings are in a yellow plastic bag.

He offers me a cigarette.

There was a black umbrella that looked just fine to me although he thinks it’s a bit too small for his liking. He demonstrates to me how he plans to change the head of the broom with a new one he found on the floor above. Seeing how it wouldn’t fit, he casually tossed it through an opening in the wall. 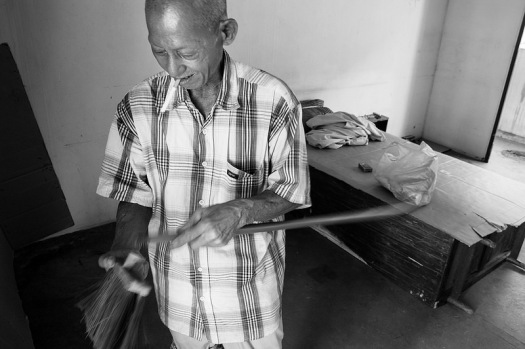 He talks about his future plans for the place. A new door. A cover to keep the rain out.

He looks at my watch to catch the time. He takes a newspaper out from a plastic bag of his belongings and places it on a rattan settee in the adjacent room. He lights a small piece of mosquito repellant at his bed side. It is time for his nap and the king ushers me out of his chambers. He gives me his blessings to explore the rest of the area. Who am I to resist?

Blocks of solid concrete loom over me as I left him behind. The roads are covered with shattered glass. In a matter of seconds I am covered with mosquitos, yielding at least 8 blood suckers with each slap. 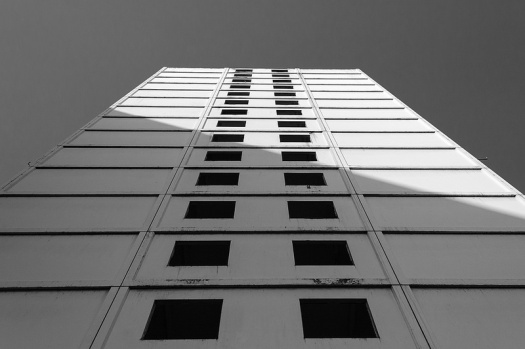 As I continued walking among the ruins of abandoned concrete, I thought hard about what it means to be called ‘homeless’.

The taboo word immediately springs up images of filth, shame and degradation. So much so that society refuses to accept them as worthy human beings. Vermins. Creatures of the dark undeserving of even a second thought. Out of sight out of mind. They deserve it.

What are the benchmarks or standards that we use to define a civilised human being? A job, a house and a car? We have become so obsessed with the accumulation and display of material wealth that we subconsciously accord respect to people in amounts correlated to their wealth. The wealthier a person is, the more we respect, fear and envy them. We kiss their hands and hope they remember your name.

Conditioned to perpetually feel insecure about our physical traits and social status, we desire for more and more each and every day. Work harder for that BMW. Work even harder to rent an apartment with a view of KLCC. Earn more money so you can spend it on overpriced coffee; because it’s important for people to know that you can afford to spend on luxury, that you’re living the life.

I will be absolutely honest in saying that I felt proud of Ah Heng. I congratulate him for what he has done for himself instead of wallowing in self pity and imposing a self- exile from society. There wasn’t the slightest hint of sorrow or pity in his stride.

In today’s social context, we are instinctively overwhelmed with feelings of pity and the need for empathy when we come across stories of people such as Ah Heng. But is it really justified? This urgency to impose standards on the lives of others?

Take a moment and think about what money, and having a home means to you.

This was written in 2009, a year after I purchased my first proper camera(replacing my compact camera which produced purple images and my camera phone with a resolution of 128 x 64 pixels). I was eager to photograph, document and write stories around KL, often finding myself in either abandoned or illegal spaces. Since then, I visited the flats a number of times, hoping to find Ah Heng and this time, maybe offer him a cigarette instead. In 2012, I found that the entire block had been demolished, with Ah Heng nowhere to be found. The mosquitos were still around though. I met a foreigner  scavenging for scrap metal and we exchanged greetings. According to him, Ah Heng had moved to another building.

Are you sure he’s still alive?

He is, but he doesn’t live here anymore.

In some ways, the short conversation felt as if I was talking about KL in a much larger context.

The people are still alive and yet they don’t live in the city anymore. They couldn’t afford it even if they wanted to.

The Pekeliling Flats has since been demolished and the main interchange for the upcoming MRT project constructed over it.