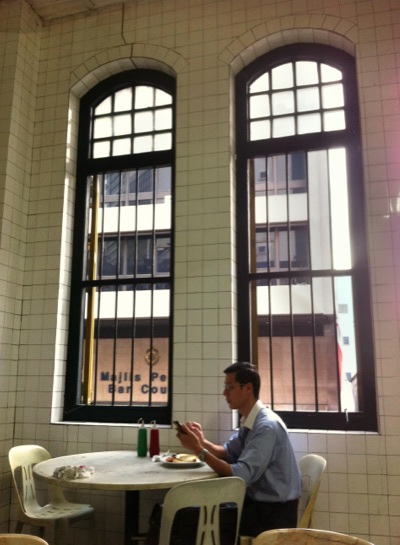 On the 28th of February 2013, the one coffeeshop I’ve always loved visiting in Kuala Lumpur, Sin Seng Nam, goes into retirement after 85 years of operation. I arrived relatively late, 8.30am to be exact, to find most of the seats already filled with the regulars. I found an empty table upstairs and made camp with a cup of kopi-o (black coffee), roti bakar (toasted bread with coconut jam spread) and my girlfriend for company. Only days before I had promised to bring her to my favourite coffeeshop but we found it closed, on a weekday. Who would’ve guessed that her first meal here would be her last.

After the breakfast crowded died down, I had the pleasure of Mr. Yuen, a lecturer and expert in typography for company. We both ‘reserved’ a plate of chicken chop at 10.30am with a promise to have it delivered at 2pm. That was how limited the food supply was for the day. This was a stark contrast to how things were only a few months ago. Sitting at the bar area downstairs, with high stools meant for those who prefer the company of their newspaper than an empty chair, one would be kept busy with the brush of waiters carrying past fresh cups of coffee and plates of toasted bread. The air used to be filled with the sound of chatter as office workers share the morning gossip and lawyers from the Bar Council just across the road prepare for the daily grind.

By 1.30pm the lunch crowd started pouring in like clockwork but many customers had to be turned away as there was simply nothing left to be served. The old uncle kept telling them “Everything is finished. We don’t have anything left.” But ourselves, the privileged ones with fork and knife in hand, were treated to a plate of the famous Hainanese Chicken Chop.

The heavy wooden staircase creaked under the weight of the many, many people who popped in to photograph the restaurant, especially the kitchen and the iconic tall ceilings held up by equally tall windows. Those who have frequented the place from the early 60’s assured me that it looked exactly the same back then. Those were the good times they said. I’ll have to take their word for it.

It might not look like much but I’m very happy with the sketch I made in my journal, made slightly better with the signature of the owner in the bottom right corner. Just like the many who visited today for one last cup of coffee and one last plate of chicken chop, I will miss this place very dearly.

Two days left until applications close on 19 January. Please note that this workshop is a closed event and will only be open to selected applicants.
Offerings at a sand mine. For whom I wonder.
Investigating the legal (and illegal) movement of sand.