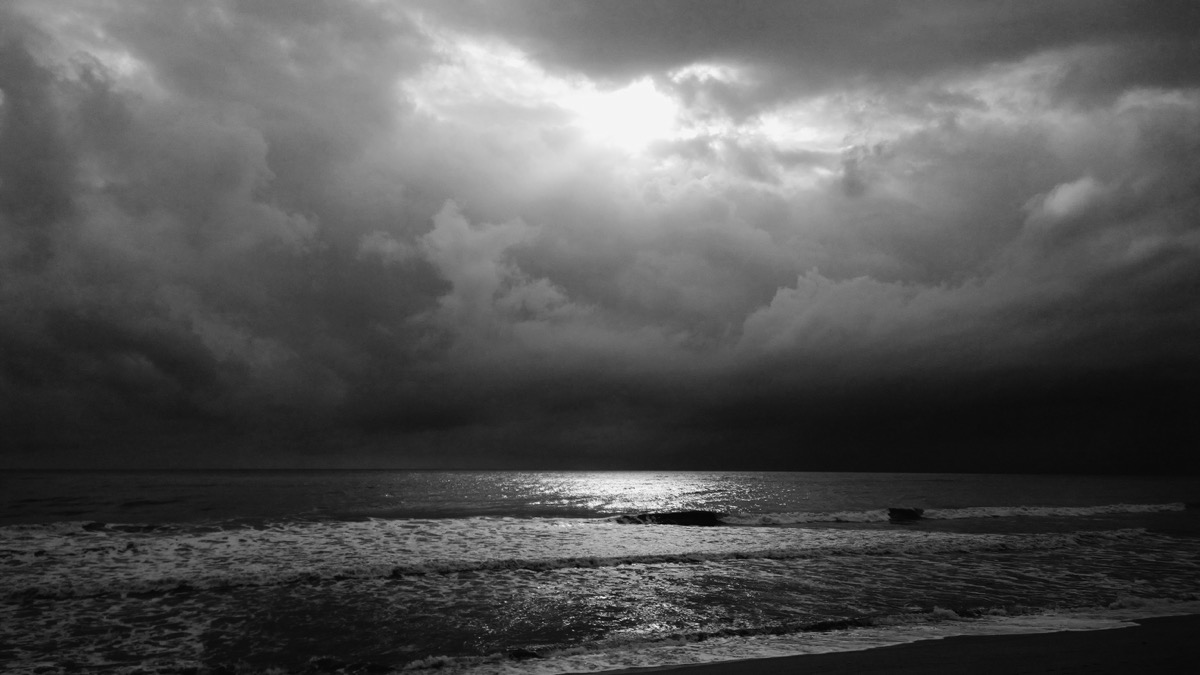 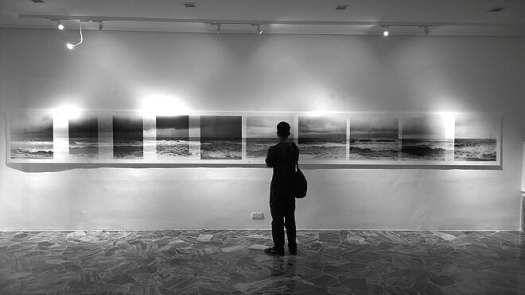 I frequently make the mistake of not writing about my work. Here’s a brief guide on how I produced an 8 meter long print from my Portraits of a Monsoon series. I’ve been told that it is the longest photographic print ever produced in the country. This essay explores some of the technical and conceptual challenges behind the entire process.

The idea was to photograph the horizon from the same position, over a span of time, on a seamless roll of film. A series of photographs, all of them overlapping to produce an even longer photograph, but of many moments. Growing up on the east coast, the impossible line was my guide, a teacher with whom I would repeatedly seek counsel in times of distress. It separated the sky from the sea and yet, it only exists because of those two elements. Life in the city was governed by vertical lines and I, a child of the horizontal line, could not fit in. I felt an intense desire to capture it as a photograph, and there was no better time to do it than the monsoon. Prep began in January.

Now, most cameras are designed to capture images as independent frames. That is the way we have always thought of photographs. Every frame was a moment to be treasured. Instead, I saw the entire roll of film as a single continuous photograph. No breaks in between, no separate moments. To achieve this I had to decide on a format and the right camera.

120 was the only format that worked. 35mm rolls are perforated, like a calculated manufacturing line. Large format added nothing to the concept and what I intended to produce. While I was convinced that the format was nowhere near original, I could not find any references of art works completed in a similar manner. One reference was Sugimoto’s horizon series, where he captured long exposures of the horizon on large format.

The advancing mechanism of the camera had to be completely manual. I had to be sure of the exact amount I had to turn the lever so the frames would overlap but not completely. I loaded a roll of 120 paper backing into the film back, removed the dark slide, and marked the frame with every full advance of the lever. Now the entire roll gave me a good idea of how the film back spaced out the frames. Next, I re-spooled the paper and ran through the roll again, this time advancing the lever slowly so I could mark it when the frames overlapped. I marked the angle of advance next to the lever and repeated this a few more times for accuracy. One would assume that something so trivial would be easy to overcome, especially when the advance lever was merely repeating the same movement.

Apparently not. The amount of advance needed to overlap the frames changed as the receiving spool got thicker, and I had to adapt accordingly. I used up most of the rolls of paper I had lying around before I was confident enough to attempt it with film. All it took was one mistake, advancing the lever a little too much, one wrong exposure, to ruin an entire roll.

Here’s what someone more intelligent than me had to say about the problem. (I copied this from a forum into my notes so I’m not exactly sure of the source.)

There are no perforations at fixed, constant intervals on roll film. So the spacing mechanism of (most) roll film cameras can’t count perforations, but work on the assumption of the varying circumference of the take up spool (a result of the thickness of the film + paper already wound around the take up spool), i.e. how many rotations of that spool it takes to transport a given length of film. That varies from film type to film type, how tight or loose the film is round the spool, and how you loaded the film to begin with (start mark). And it varies: the more film is on the spool, the larger its circumference, the fewer rotations it takes to transport a given length of film. So any deviation from the assumption will have a knock-on effect, creating a perhaps small error on the first frames that will change to a much larger one on the last. A slightly thicker film + paper combination will make the circumference (and thus the length of film one rotation of the spool wraps around it) grow faster than a slightly thinner combination. So spacing will be wider with the thicker combination, getting progressively so as more film is wound on the spool.

I measured and pencilled a straight line across the ground-glass as a guide. Since the frames were to overlap on both sides, the horizon had to be accurate. It would have been possible, at least theoretically, to create a seamless overlap by using a graduated ND filter to compensate for the segment of double-exposed negative but the charm would have been lost. The idea and intention of having one frame over another had to be apparent on the photograph.

It was decided then. I would work with the RB67 with a 120 film back, exposing on the slightly clinical Ilford HP5+ 400. I also had a couple of rolls Kodak Portra 400 just in case.

While shooting, I kept a small notebook by my side to pen my thoughts. Sometimes I wrote while waiting between shots and sometimes only after I’ve left the beach. I also kept notes of every single exposure I made, noting down the exact time, settings and description of the scene/shot. I was completely alone, and exceedingly happy. The sea reinvigorated my soul and the the entire process, the focus and dedication it demanded was incredibly fulfilling. There were times when I had to run back and forth between shelter and the shore, as the rain came and left.

Here’s an excerpt from my journal:

The sun is still behind a massive, immovable cloud, but it spreads its blessings every other way. The sky turns a gentle yellow and the sea, aged silver. It is a gift.

But it doesn’t last for long.

While the clouds displayed beauty and grace, the crashing waves demanded respect with its brute force. Back and forth, it dug into the sand, carving dunes on the otherwise flat beach. The power of each wave is only defeated by the receding one before it, but every once in a while, they compounded and stretch itself further than before, grasping at the knees of those who only dared venture ankle deep.

Conditions were tough but I enjoyed every lonely moment tremendously. A single minded, focused, and committed discipline. I would wake up at 5am, prepare a simple breakfast, then lug my tripod and camera down to the beach, and wait. I spent, on average, about 6 hours every day, standing at the exact same spot, burning through a roll of film. When it rained, I would wait until the rain was too heavy before running for shelter. 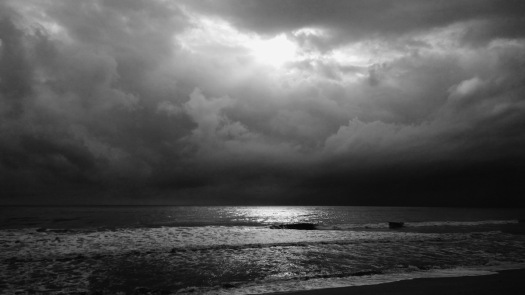 I remember one day when I literally spent the entire day waiting for rain to blur the distant horizon. All I did was to stare at the horizon, waiting for the slightest shift of contrast and blurriness before I ran down to the edge of the water to set up the camera. I had maybe 30 seconds to get the framing of the horizon right before the first droplets started hitting the lens and everything turned into a mess of gray within a minute. Nothing less than absolute focus was acceptable and I loved it. At the end of each morning, I wrapped the rolls and stored them in a box, along with my notes. I spent the rest of the day wondering if I got the right shots, if I overshot a frame, if I made a mistake with framing, if I had ruined a roll. Only later I would realise that I managed to do all of them across many rolls. 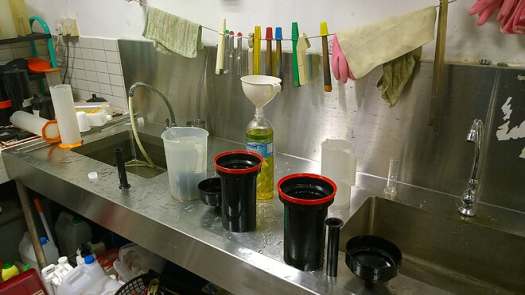 Based on my notes, I selected a few important rolls and headed down to Singapore to meet up with my spiritual brother, Nanda. We developed 4 rolls together at his darkroom while the colour rolls were dropped off at my regular lab. The rest of the black and white rolls were developed at home.

There was one colour roll I particularly liked. The Kodak Portra 400 was exposed at a magical moment when the yellow tint of the rising sun brushed against the crest of the waves, contrasting against the blue tint from last night’s waning moon. Unfortunately, the negative was destroyed by the processing machine. 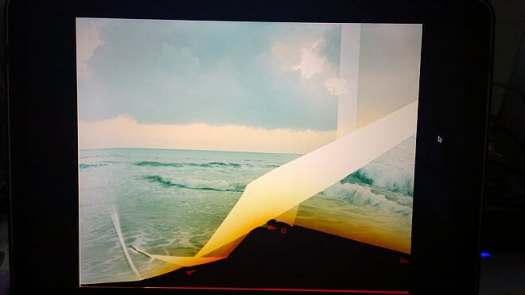 Now I had rolls of negatives hanging in my room, waiting to be scanned. At this time of writing, there are still a couple of undeveloped rolls from the project, sitting in my fridge.

Scanning, printing, and mounting will be continued in part 2.