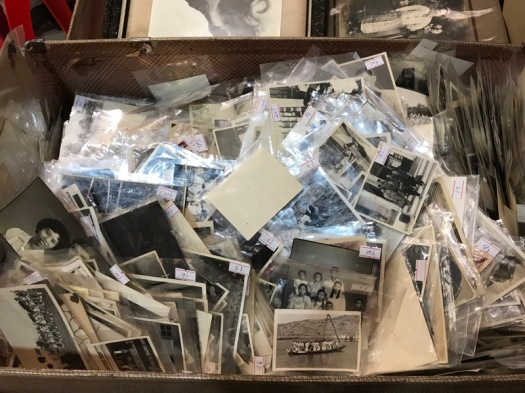 What better way to spend a Sunday afternoon than browsing through a box full of abandoned memories at the flea market in Amcorp Mall. These old photographs are usually sourced from family albums, where the prints are stripped out and packaged to be sold individually. In light of how everything remotely old is being sold as ‘vintage’ items, it is of no surprise how an item that cost RM0.50 cents only two years ago is being sold for RM5 or RM10, regardless of the subject. Photographs of known landmarks go for much more.

The biggest change in the last five years alone has been the accessibility of e-commerce sites in facilitating the buying and selling of used items. Mudah.com.my kickstarted a frenzy of throwing everything one could find in the kampung house onto a virtual marketplace, and now the process is even easier with Carousell. Whereas in the past, the value of any item was up to a willing buyer and willing seller, quick access to eBay and other online stores introduce a ‘third party’ that invariably sets the benchmark for price. When bargaining, sellers are quick to refer to prices of items being sold online, “This is the market price, if you don’t believe, you can check eBay.”

Before the ability to create images became as common as it is today, every photograph was a conscious decision, created for a specific audience. If it was a record of a wedding then it was meant for the family album, if it was the opening of a new tin mine it was for the investors and the owners. The act of printing necessitated a purpose as it was a limited resource. Photography was expensive, and for a long time, reserved only for important events. Today, photography is incidental, and its audience, random at best.

Some of the photographs in the bulk were included in letters sent to lovers, would-be-lovers, family, and friends in far away places. Many had hand-written messages on the back such as, “With my deepest love and remembrance.” or “Kepada Abang Salleh, ini gambar adik-adik semua.” The photos became postcards, the beginning of a conversation, a record of a joyous occasion, a spark in a budding relationship.

It was also common to find studio portraits, with the sitter framed and photographed in the most flattering way possible, to be used in job applications, and more importantly, marriage proposals. Some are of familiar landmarks, family shots at the Merdeka Park, Tugu Negara, Taiping Lake Gardens, the bus station, a waterfall, and places that used to exist.

One habit I have is to look at the back of every photograph for stamps, inscriptions, marks, patterns; any information that would reveal something about the photograph or the time in which it was created. Stamps or embossing of the photo studio’s name and address is fairly common.

There was one photograph of a group at a dinner table, most likely paying attention to a speaker or performance off-camera. I turned it around and to my surprise, there was a negative film of a young woman. It did not have a name, or any proof that the photograph and the negative were related. I decided to buy it just so I could make a print from the negative. 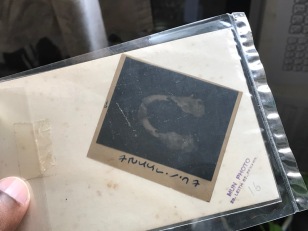 Taken out of their original context, it is hard to estimate the purpose or value of any of these photographs sold in stacks in flea markets across the country.  If it was worth nothing to the original owner who presumably discarded or sold the album, then what would it be for the person browsing through a mountain of random photographs in the basement of a shopping mall? Perhaps to invoke a sense of nostalgia, to be used on film sets as props, and at best, to be treasured as an artefact with some historical significance. Then the photograph earns a new lease of life, but only in the eyes of the beholder.

Apart from the negative, I was overjoyed to find this beautiful photograph of a teacher with her blind students. At the photographer’s instructions, the students crowd around the teacher and face the camera. The teacher’s smile is infectious, and speaks volumes about her relationship with the students. The only problem was that none of them would ever be able to see the photograph.

It reminded me of a personal project I worked on many years ago, where I worked with a young girl who was blind since birth. Her parents were separated, and took turns to send and pick up her up from a school dedicated to the blind. Her world was built on touch and sound. Every time we met, she would hold my hand tightly and feel every knuckle and wrinkle, before confidently calling out my name. She had the unshakeable confidence of a warrior, no struggle was too much to bear, no stranger she shied away from. One day, we were at her home while waiting for her mother to return from work. I took a few photographs, and she was quick to respond to the sound of the camera. “Take my picture” she said, and immediately raised the universal ‘v’ sign. I pressed the shutter a few times and she was eager to see the picture. For a moment I was stunned. How do I show a photograph to someone who can’t see? What do I say to her?

I handed her the hefty camera and tried to describe what was on the screen. All I could say was “It’s a picture of you.” as if it meant anything in itself. I wondered what was going on in her mind at the time, what was she ‘seeing’ as she listened to my voice and held the camera in her hands? Having never seen a photograph before, was she able to grasp the idea of a moment in time being frozen forever? How did she visualise screens, which were tangible to her touch, and yet lifeless. Music and films could be understood, as sound itself has a rhythm and pace, but what about photographs? What of prints? Two dimensional sheets of flatness to her, appears to us as an orchestra of colours and shades.

Photography is only a medium, not a goal in itself. Relationships are far more important, and rewarding. I work hard to remove myself from the photograph, so all that remains is the subject, relationship and context. The last time we met, she had left the school in KL to transfer to a boarding school in Johor. For as long as I live, and continue to work with photographs, I will always remember her as the exceptionally strong girl who conquered the world without ever seeing it.