Amanda Nell’s latest short film Vinegar Baths just picked up the Next New Wave Award and Best Cinematography at the SeaShorts Film Festival 2019. This is a quick rundown of my notes as Director of Photography.

Synopsis: A tired and overworked nurse at the maternity ward finds joy when she is alone roaming the hospital corridors at night. It’s the time when she can finally eat.

I can’t remember  where I got this still image from (I’m sure it’s a still from a film), but it very quickly became the reference point for the film. The director felt that the colours and elements in the frame captured the atmosphere she was looking for. This made it a whole lot easier to plan everything else. 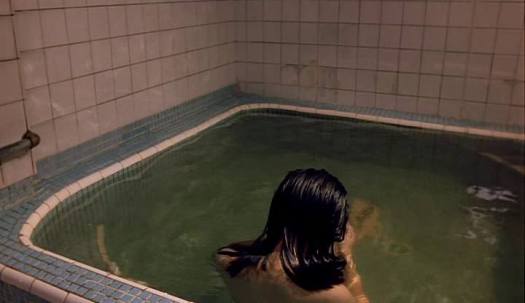 We had meetings to plan the shots and how they all come together as a film with the right rhythm and structure. We discussed the scenes in depth and decided on scenes where we should simply look, and the ones we should be actively involved in.

Throughout the film, the camera is detached. Meaning we are not seeing the world through the main characters perspective but we are instead observers, looking at these curious creatures playing out their lives in a glass aquarium. The camera is present but is never conscious of itself.

We shot on a single URSA Mini Pro 4.6k with a set of rehoused vintage lenses which gave a slightly ‘muted’ sharpness but still retained the sterile, plastic feel of digital sensors.  For the NIGHT shots I had contemplated using an entirely different set of lenses but the differences in colour proved too much of a distraction as some of the scenes go back and forth between day and night.

The aesthetics of the film rests on the way colour is treated in day and night scenes. Overall, the dominant colour is pink, supported by a sickly magenta, with splashes of blue (see frame below). It was a real pleasure working with such a dedicated team of world builders, especially Art and Production Design, headed by artist Sharon Chin. 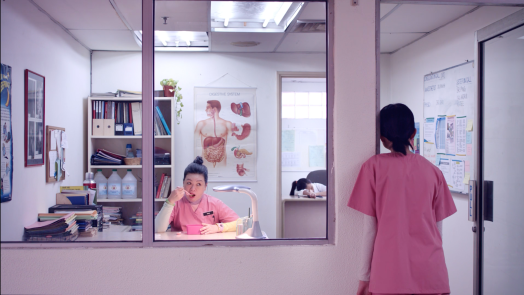 During the DAY, the highlights are intentionally pushed almost to the point of breaking, and the colours slightly muted to create an environment that is just slightly off.

It feels harsh and dull in a way that makes anyone in the space just want to curl up and hide under their desks for a quick nap. Whenever there is a window, it feels as if the world outside is intensely bright and overbearing on the senses, making everything feel unnatural and uncomfortable. The quality of light makes the environment feel bright, but lifeless.

We added a spot outside the window and pointed it inwards so the glass portion of the wall appears blown, and then removed the covers for the fluorescent light so the bulbs also appear burned at the same intensity. This helped increase the contrast in the room and pool the light around the main character. Throughout the film, everyone is tired all the time, and nobody really wants to be there. Also, for all DAY shots the iris was stopped down to extend the plane of focus, distracting the eye with unnecessary details all across the frame.

NIGHT is when things come alive in the hospital. Colours are punchier and deeper, especially the reds in the skin and green in the hospital fabric. We shot everything at f/2.8 so the area of interest within each frame becomes intentional. We switched off the house lights and only lit precisely what needs to be seen.

The two images below are an example of the kind of references I provided to the colourist as a guide on colour saturation and white balance, tint etc.

Before grading and after (reference):

Masks were a huge help in shaping the pools of light in each scene. During the shoot I would make notes on where and how the shadows can be shaped. We do as much we can practically, and then utilize the wonders of modern technology to push things to exactly where want them to be. The frame below is a perfect example of how all the colours of the film come together nicely; pink, magenta and blue.