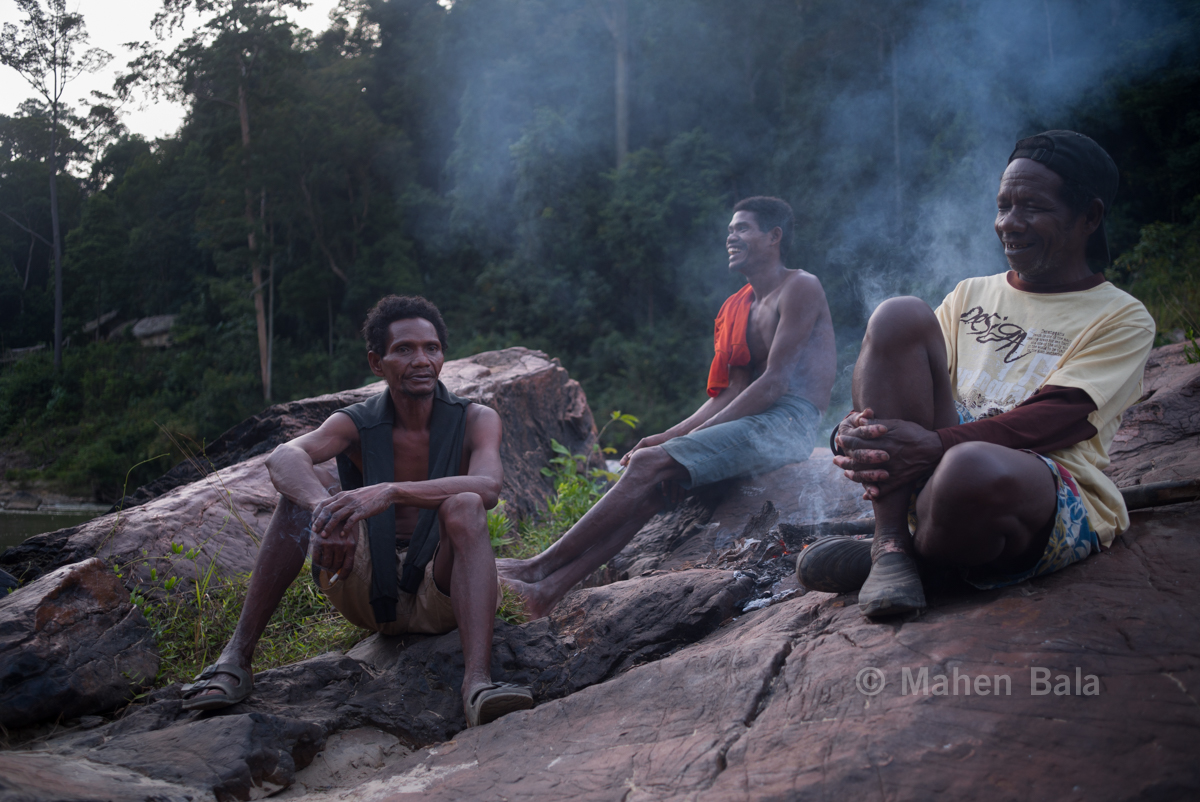 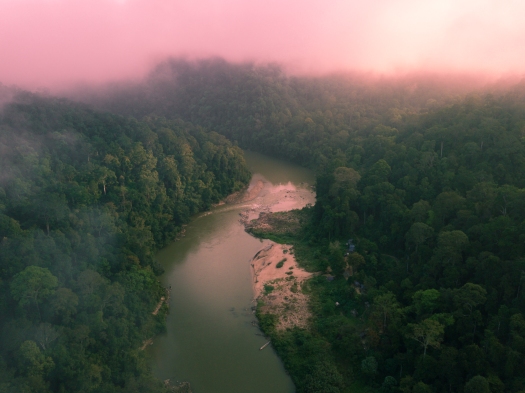 A forest has no history. It remembers no beginning, follows no moral, worships no God. Trees fall and sprout anew, rivers flood and dry out, animals kill and then they themselves die, all part of a perpetual state of unguided renewal. Churning itself anew for more than 130 million years, Taman Negara is a 4,343 square kilometre patch of pristine tropical rainforest stretching over Pahang, Kelantan and Terengganu. The main entry point to the national park is through Kuala Tembeling, where visitors can register for tours and accommodation, or shop for last minute supplies.

The vast expanse of the muddy green Tembeling River forms a natural boundary between the park and the state of Pahang. Cruising upriver, Taman Negara is on my left, and a seemingly endless stretch of resorts, and chalets in Pahang on my right. I pour a handful of the chilly river onto my feet, a brief respite from the heat. The hull of the boat tears through the reflection of towering giants on the face of the river. I am travelling with a small crew to photograph and film a documentary, accompanied by Nurul Fatanah, a scholar who has worked with the Batek for more than a decade.

Soon enough we arrive at an Orang Asli settlement. I wave at the children standing by the river but they don’t wave back. Maybe they can’t see me. We sit down on the forest floor with Sena, one of the Batek elders, for a conversation. I begin by asking Sena for the impossible, to explain what cēb bah hēp (to enter the forest) meant, in a poor attempt to understand the mechanics of this invisible world. I struggle to keep notes as he spoke in Batek and occasionally Malay to make sure I understood him. 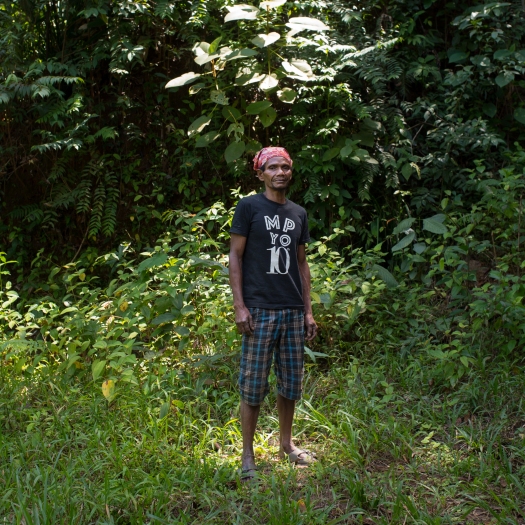 “We have always been here. Us, our ancestors, and those before them. The forest gives us everything we need. When we need food, we enter the forest. It is the same when we need medicine. When we need to bury the dead.” he explains.

To be Batek is to be one with the forest. With a population of approximately 1,500 scattered across the interior of Pahang and Kelantan, the Batek are Negritos, the earliest Orang Asli tribe to arrive in the peninsular about 25,000 years ago. Today, they are among the last remaining nomadic hunter-gatherers in the world. They identify themselves spatially within ecological niches and relative to other groups and tribes, each with their own distinct language, customs and history. There is no ‘I, me or we’ in their language, only ‘Batek’ is used to identify themselves in conversations with outsiders. They do not imagine the land as a space contained within imaginary lines of authority, but

The land is imagined as a landscape of communal memory, shaped by individual encounters with ancient trees, wild beasts, and unique geographical formations. They ‘bury’ their dead on trees, so the soul rises to heaven easily. They eat only what they need, which the forest provides, and there is always enough for the entire village. They move with the seasons, living off an abundance of fruits during the musim buah (fruiting season), and collect honey during the musim bunga (flowering season). They name their children after flowers, trees, fruits, animals, and the elements. 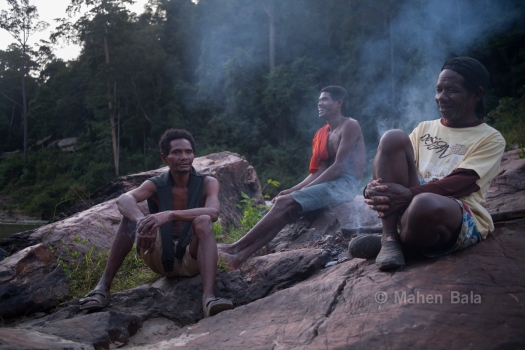 They do not argue or fight, and instead diffuse arguments by having either party (or both) leave the settlement for a short period. A hunted animal is not a prize or a game, but sustenance provided by the forest and is treated with respect. Their society is egalitarian, with men and women bearing equal responsibilities within a family unit. The children learn by helping their parents with building a hayak and foraging for food, while the elders tell them stories of old and sing their ancestral songs. The Batek do not claim land ownership, nor do they hold on to material possessions except a blowpipe for the men and a bamboo comb for the women.

Mid-way through our conversation, Sena smiled and announced my Batek name: ‘Chengal’.

Here, I am not my father’s son but a part of the forest itself. The Batek way of life offer us a alternative way of reimagining our relationship with the forest. The way we think about resources and consumption. The way we imagine ecosystems and our position in it. A social system yet uncorrupted by capitalism, greed and reckless exploitation of human and natural resource, and instead a natural state of balance with the environment.

But things are very quickly changing. The Batek, just like the rainforests of Malaysia, exists in the long shadow of the past and a chaotic present, but with no future. To enter the forest today is to be confronted with the chainsaws of loggers companies, and the shotguns of illegal poachers from neighbouring countries. Deforestation and socioeconomic pressures continue to push them away from the forest, and into mainstream society. The Kelantan state government believes they should leave the forest, embrace Islam, get a job, and settle down permanently.

“I used to be in the forest all the time. These days I rarely go in. It is dangerous. Now we just sit here (in the kampung). To live outside of the forest…is like living in a dream.” says resigned Sena. What else could he or the Batek possibly do?

This ‘kampung’ is little more than a temporary scattering of hayaks in an open clearing, shaded by a skirting of ancient trees. Women and children huddle together in the shade to escape the sun, while the men wait for the boats to arrive. The kampung is a favourite stop for tourists hoping for an adventure into the deep unknown, an encounter with the unfamiliar ‘other’ playing out like a scene from Conrad’s ‘Heart of Darkness’, half expecting to find Kurtz in one of hayaks. Instead they find families huddled together in the shade to escape the scorching sun. Domestic and international visitors alike come bearing many gifts: bags of rice, bread, junk food, biscuits, and even plastic toys. The tour guides hire the Batek men to demonstrate the use of a blowpipe and to start a fire. Before leaving the guides press folded notes into their palms.

A brief moment of silence before the next boat arrives.

On my last morning with the Batek, I woke up before sunrise. Standing at the edge of the river, I listen closely to the sound of time flowing by. Three hornbills glide across the river one after another, landing on the highest branch of the tree in front of me. The first rays of morning pierces through the dark blue tint of dawn.

Just like the forest that sustains them, the Batek have no beginning, no written history, and I leave wondering if the end is near. As the boat begins its return journey downstream, I look back and wave at the children standing at the entrance of the kampung. A wave and a smile as a gift, and they bolt away from sight leaving only a trail of laughter behind.