The last time I was here, the house was shrouded in darkness. I could barely see the tail light of a motorcycle, streaking to a halt between the stilts. The house stood alone on an empty plot of land, or rather the land around the house had been cleared. I promised I would return. This was in March 2018.

By November the house had been cordoned off and a shiny drawbridge loomed in the background, a grotesque anomaly in the landscape. Over time it became evident that these two structures cannot possibly exist in the same space, or even the same time. The kampung house remains a symbol of tradition, and in the eyes of many, a symbol of the quiet backwaters of the rural area waiting to be developed. Progress was measured in the height of skyscrapers, not wooden stilts, perahus and coconut trees.

This is the last wooden house standing in Kampung Tanjung. If there was a time for me to photograph the house, it was now. Or never. 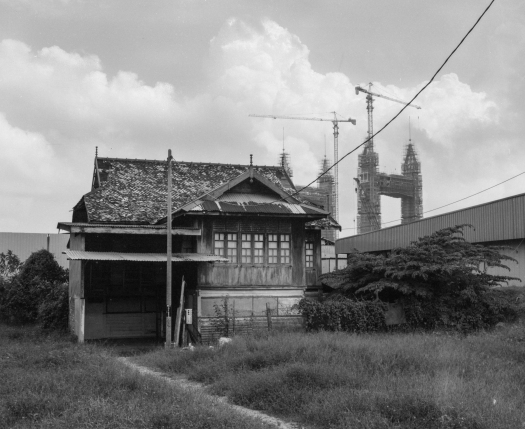 I walked up to the house and greeted, “Assalamualaikum.”

Up a rickety flight of stairs, through the front entrance was a small waiting area where a shirtless man with Ramli Sarip style hair sat on the only cushion left on a rattan settee. A small Nokia handphone hanging on the wall played classic ‘60s Malay songs.

This is where I met Wan Mokhtar Wan Yusof, 64, the last house owner standing in the way of the mega RM4.5 billion Kuala Terengganu City Centre (KTCC) project. KTCC is part of the “East Coast Economic Region’s plan to boost urban and coastal tourism by making the Terengganu State a tourism gateway to the Region.” The megaproject covers approximately 180 acres of land at the rivermouth (muara). The area to be developed will be named Muara South and Muara North, integrating the existing Kuala Terengganu urban area by “merging them into a vibrant Heritage Waterfront City.”

The development blueprint includes a theme park, entertainment and retail outlets as well as commercial and residential components. The drawbridge will be the first in Southeast Asia housing an observation platform, gallery and café. In Malaysia, the greatest measure of progress is to turn any piece of land into a shopping mall.

“Many journalists have come to see me. I always send them away to my brother at the pasar.” he mentioned in passing, recalling the days since he and the house attracted nationwide attention as yet another heritage site under threat by development.

He struggled to stand up, and took a deep breath before ushering me through the house. The faded green cushion he sat on was stained by the sweat from his body.

To the right was a large empty space, the rumah ibu, reserved for social activities during the day, and sleeping area for children and unmarried family members at night. Large windows adorned all three walls, and the door on the fourth opened into an even larger space called rumah tengah with an impossibly high ceiling, and a kitchen further back.

“This house was built around 1941. Right when the Japanese came. My father was a goldsmith, as was his wife. The house is empty now. Water seeps through the roof when it rains.” Wan Mokhtar explained, as he stomped his foot down on the solid cengal floorboards. We walked around the house as I photographed every corner of the house.

“My health isn’t very good anymore. I walk a few steps outside to the grocery shop and I’m already breathless. My legs can’t take it. Must be all the years of working on the oil rig. I traveled all over. Off the Terengganu sea, Labuan, Bangkok. I made good money. Everything I earned went to my children. I invested in them.” he explained while pinching his calf. There was a hint of sadness trailing his voice as he looked around the empty house.

Much of the interior was hidden away in thick swaths of shadows, ink black in its depth. The longer I stared into it, the more it revealed; hidden objects, granular texture of the wood, and the comforting patina of time gradually appeared.

Photographing the house in its entirety was a race against time, as if the arm of an excavator would come crashing through the roof at any moment. No matter how many photographs I took, of every imaginable angle, there was bound to be something I missed. The eyes look, but it is truly the brain that sees. And this brain only sees a few things at any given time, adapting quickly to new environments. There is a threshold of familiarity that the brain will never go beyond, ignoring everything that is deemed ‘safe’. The only way around this trap is repetition.

As soon as I felt satisfied with my coverage, I would go back to the entrance, turn around, and start again. And again. It is like opening and closing the same book repeatedly, but reading a new chapter each time.

The clock is still ticking.

“One day an officer from the land office came and told me I have two weeks to vacate the house. Does he think I am a duck? You can simply shoo me away and I will find some place else? I am a human being.” 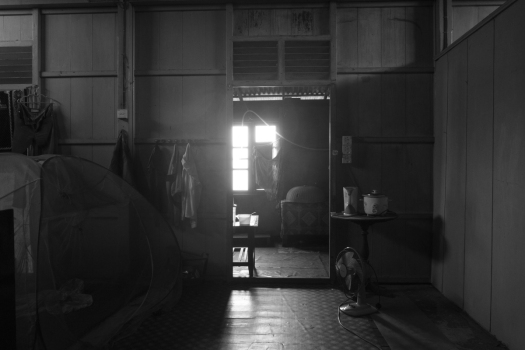 The state government, as legal owners of the land, have made an offer for settlement, but Wan Mokhtar is adamant that he is entitled to much, much more than the reported RM20,000. This is the only home he has ever known and the compensation offered won’t amount to much should he accept it.

We returned to the entrance. He sat on the lone cushion while I took to the floor. There wasn’t much of a choice and we both knew it. I asked when he was planning to move, acknowledging the inevitable.

He sat back for a moment before declaring, “I’ll move when they settle the deal. Till then I’ll just sit here with my music.”

I looked across the rumah ibu and noticed a small door I had somehow missed earlier. A store room. There was a latch but no lock. Would it be too much if I asked to look inside?

One Reply to “Imagined landscapes”

When durian was in season my dad would bring home gunny sacks filled with durian from the farms he visited. We had so much fruits that sometimes that was all we had for dinner. A buffet of durian and mangosteen. Naturally there was plenty leftover and mum must have learned how to make this dish from my Malay relatives. At home we called it pulut durian, and I ate bowls of it for breakfast, lunch and dinner.
A stranger sits down at my table and offers me a glass of water.
Art has the potential to move us in unpredictable ways. Sometimes they make us laugh, at both ourselves and the world. Sometimes they nudge us out of our comfort zones, invoking unfamiliar thoughts and emotions. And sometimes they leave us drained and dead inside. But don’t worry, everything will be ok.