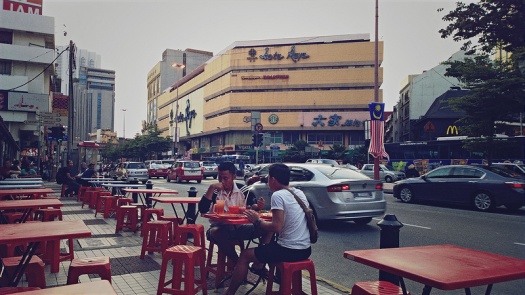 A bus stop is the worst place to ponder on the purpose of life and existence. In fact it’s the worst place for any thought at all. Lengthy ones are usually interrupted by the arrival of the bus and short ones only make the wait increasingly unbearable. It is best to simply exist, as if you and the structure were one and the same.

So I waited for the bus on this side of the road, headed into town. After half an hour, a bus arrived on that side of the road. The driver gestured for all of us bus-spotters to quickly get on.

“You have to go this way! Don’t you know they’ve changed the system??” said the angry driver to the silent and confused passengers. He took the long route, deep into Ampang and decides to stop for a the tarik in the middle of nowhere.

Much later, I was headed home so I took the train to KLCC and walked to the bus stop. Under the blanket of darkness, red blinking LEDs on a board indicate the arrival of an invisible bus. My bus was no longer running and I had no idea how to get home. As usual there was no information at any of the bus stops on the route changes, not even on the website. Some buses arrived with the old numbers printed on A4 paper pasted on the windscreen.

Anyway, this isn’t another tragic tale about dysfunctional KL. Rather, it’s about who I met next.

“Good evening, this is Uber. Where are you waiting?”

I was surprised to see a middle-aged Malay woman driving a car for Uber. Let me add that I was pleasantly surprised. The car arrived and off we went. For the sake of privacy, of myself and hers, I shall omit the identity or location of the driver. Let’s just call her Kak Noor.

It’s a bad habit of mine to force strangers into conversations. Not sure if it makes me any worse than the usual taxi driver-political commentator who refuses to just shut up and drive, but I do it anyway.

“I just got divorced last month. That time I was driving an Estima but now that he(the ex-husband) doesn’t help me pay anything, I simply can’t afford to keep it. I gave it back to the bank and got this(a Nissan sedan).”

The car was new, clean and there was a book at the back of the front passenger seat. I was tempted to pick it up but I refused to fall for Uber’s cunning trap of making me feel comfortable in a strangers car. Maybe it was a subtle hint that I should indeed shut up and read a book. So I did what was naturally Malaysian and complained about the public transportation system.

“Oh, I have not taken the bus for years! I used to ride the LRT and then later got myself a scooter. That’s the best la.” she assured me.

And she was right. You save on petrol, don’t pay toll, parking is usually only a ringgit or two if not free, and you don’t get stuck in the jam. The only snag is when it rains and you arrive at meetings looking like a washed up body at the beach.

The city forces you to drive a car and then punishes you for it. But sometimes it can be rewarding.

“After my last job, I had no idea what to do. I’m only SPM so I’m competing against the juniors. My daughter suggested Uber so I went there on Wednesday, and on Thursday I started driving. Ok la so far. It helps me pay whatever I need to pay. Have to cari makan right. By the way, I also make kuih you know!”

Her laughter had more life than the traffic outside but it sank with a hint of sadness. I knew she was thinking about her family. I also knew she was just dying to talk about it.

“The eldest is already married, the second one graduating soon, the youngest is 11. The eldest one would tell me, “Mak, I wonder if I will ever be able to afford my own house.” I think it’s very hard la even for graduates today to afford anything. Kereta pun susah. But they have to find their own life. The youngest is staying with me for now so at least I have company.”

A smile trails behind a heavy sigh.

“Aih..nak buat macam mana kan. I finish driving at about 10.30- 11pm. Good thing is, I get a weekly income so that makes it much easier to handle finances.” she reassured herself, this time with a wide smile and a firm look ahead.

As I was about to get down, I turned around and wished her a good night.

I know of many friends who complaint about drivers, be it regular taxis, MyTeksi or Uber, who bother them with mundane questions in a failed attempt at making small talk. And then they go on to complaint to their friends about how people in KL are so closed of from one another, too preoccupied with their smartphones, and live isolated lives in their guarded condos. Maybe all of us have a story we’re aching to tell, but can’t find someone who’s willing to listen.

Thanks for the ride Kak Noor.

When durian was in season my dad would bring home gunny sacks filled with durian from the farms he visited. We had so much fruits that sometimes that was all we had for dinner. A buffet of durian and mangosteen. Naturally there was plenty leftover and mum must have learned how to make this dish from my Malay relatives. At home we called it pulut durian, and I ate bowls of it for breakfast, lunch and dinner.
A stranger sits down at my table and offers me a glass of water.
Art has the potential to move us in unpredictable ways. Sometimes they make us laugh, at both ourselves and the world. Sometimes they nudge us out of our comfort zones, invoking unfamiliar thoughts and emotions. And sometimes they leave us drained and dead inside. But don’t worry, everything will be ok.